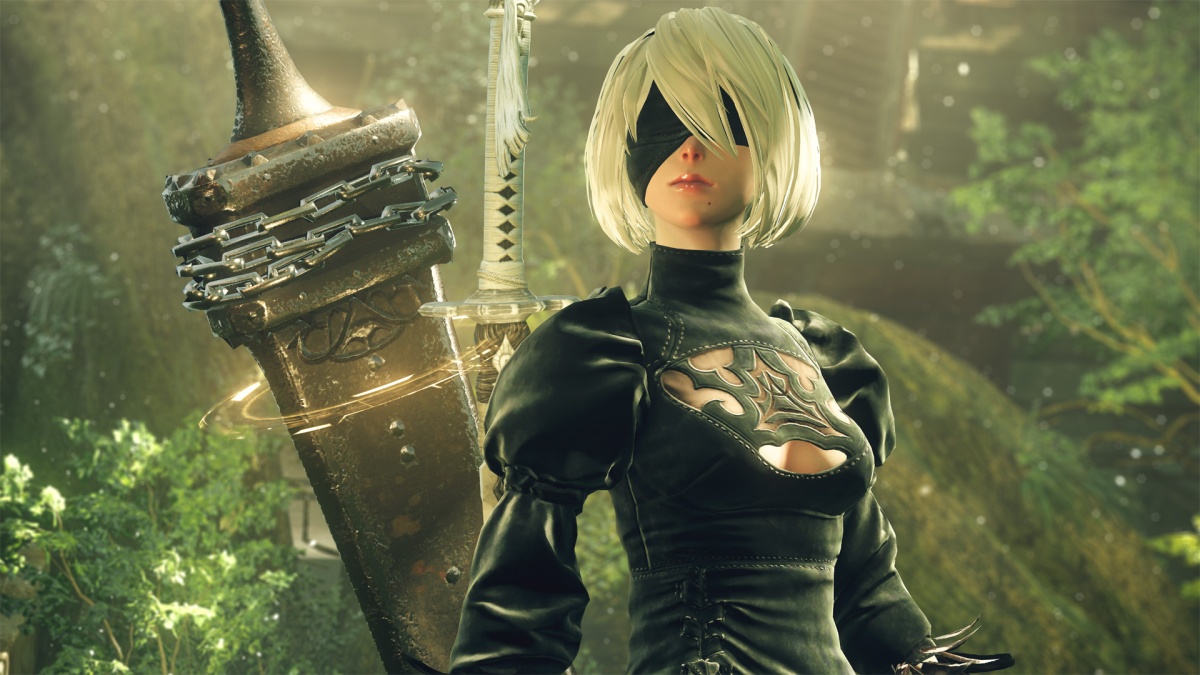 NieR: Automata is going to have a long tail. The release schedule in 2017 was a chain reaction of hit titles exploding on the scene; RE7, Persona 5, Zelda, Mario, Horizon, Cuphead, etc…  Players will be sorting through the rubble of overlooked and passed over titles for some time, and NieR: Automata will be on many a backlog list. It was well received, garnering an 88 on Metacritic. It sold more than 2 million copies worldwide. It is a success by any metric. It was developed by industry powerhouse Platinum Games, published by Square Enix, yet it somehow maintains the quirky cache of an indie title that those ‘in the know’ wink and nod about, across darkened corners of the internet. When a player dares to lament, “I don’t get it,” the Enlightened form a cryptic smile and whisper: “Keep playing, you will.” Yes, NieR: Automata is going have a long tail, and it will prove to be a divisive title, as those who have the patience to discover its beauty argue against those who do not see a reason to keep digging. And neither group will be wrong.

NieR: Automata pushes back against the player in so many ways, both subtle and overt. At the game’s outset, the combat skews to difficult. The button mapping forces your hands into octopus-like contortions, with each of the four triggers performing essential tasks, often at the same time. While the game allows the player to power up their characters relatively quickly, dealing more damage and taking less, the control scheme remains the same. It prompted Kotaku to write an article encouraging players to remap the buttons. Purists might disagree. Also, the game’s navigation system is a disaster. The map never anchors its orientation, forcing the player to manually adjust it every time, and it can be swiveled on every axis, fully 3 dimensional, offering more detail than is usually necessary, making it cluttered. Side quest icons appear in an inconsistent fashion, with little to no notification, and in the early stages of the game they are easily missed. Fast travel is not available for the first several hours. Finally, its narrative opening is mostly generic. For a game widely touted for its incredible storytelling, many players might find themselves asking what all the fuss is about. The Androids are fighting the Machines because they are at war, and that is what they do. 2B, the main character at the outset of the game, is not very likable. She’s cold and serious. The character designs for the Androids and the Machines are very stylish, but the world they inhabit is sterile. The open world in NieR: Automata is serviceable, but compared to the living environments in modern counterparts like The Witcher 3 or Horizon: Zero Dawn, it seems like a step backward.

This is all harsh, and valid, criticism. And yet, NieR: Automata was my favorite game of 2017.

This is why. It is a work that is greater than the sum of its parts, but the equation is so lengthy, so convoluted, that many players may not find it worth checking the math. Hunter Galbraith already wrote a deep, academic analysis of the plot and literary references in NieR: Automata. And hats off to him, it’s great. It’s full of spoilers, but if you’re ready, you can read it here. NieR: Automata will continue to spark deep discussions like that in 2018 and beyond.

NieR: Automata straddles two distinct genres, and it was brought to market by two industry powerhouses completely synonymous with the genres they represent. Developer Platinum Games, with titles like Bayonetta and Metal Gear Rising: Revengence, have established themselves as a team that can produce deep and complex action-battle systems while also maintaining a fast, flashy, and stylish presentation. And publisher Square Enix hardly needs an introduction here. Their industry defining catalog of lengthy, melodramatic role playing games is the reason we use the acronym JRPG. NieR: Automata’s combat, however, does not live up to the pure Platinum vision put forth in Bayonetta. And players solely looking for the next great Square RPG are going to be disappointed as well.

First of all, let’s examine the combat. In its introductory chapter, NieR presents an impressive array of viewpoints and playstyles. The gameplay seamlessly shifts from top-down shooter to twin-stick bullet-hell to third-person 3D action. Pure RPG fans might find the frantic action completely daunting, and as I said above, even a more balanced player will find it somewhat difficult. But once the dust settles and the player gets into the game itself, combat quickly becomes rote. Hold down auto-fire, manage the lock-on function, jump, melee combo, dodge, repeat… While a game like Bayonetta punishes button mashing and forces the player to learn the nuance in the systems, NieR: Automata stays static, with enemy types offering little variety and weapon variation never being much more than equipping the most powerful ones available. The shifts in perspective, from 3D to side-scrolling to top-down etc., continue to occur in various areas, which does keep things interesting. The ‘Chip’ system in NieR allows character customization, and can be used effectively by those players who enjoy a good min/max build, but it is easily exploited and can eventually break the game, making the combat meaningless. But more on that later.

On the RPG side of things, the presentation is fantastic. The character design, the voice acting, the music, the writing– it is all of the same high production value that Square Enix is known for. The protagonist is an android soldier named 2B, she is paired with sidekick 9S. They are part of an elite team of soldiers tasked with battling alien machine lifeforms that have taken over Earth. Humanity is in hiding. While NieR: Automata is a follow-up to director Yoko Taro’s Drakengard series and a last generation title simply called NieR, the relationship is loose enough that Automata’s story can be enjoyed with no introduction. After the first few hours, the game starts to nudge the player out into the world, and, at first, it feels very familiar. A fantastical, post-apocalyptic city, buried in overgrowth and sprinkled with chests to open and glowing items to collect gives way to differing locations, sterile desert, lush forest, and even an amusement park. Enemy machines roam the landscape. The difficulties with the map become apparent quickly, but an intrepid explorer will quickly learn to manually adjust it, each time they open it, to an orientation they can recognize. Occasionally, new icons appear, large ones for story objectives and smaller ones for side quests. And for a dozen hours or so, the player is treated to an exciting, recognizable action-RPG experience, but nothing as deep, or lengthy, as the Square Enix name would lead one to expect.

And then it appears to end.

Some players might shrug, feel somewhat satisfied, and move on to other games. But NieR: Automata directly tells the player that the experience isn’t over, and encourages them to start again.

Minor spoiler warning from this point on. The player is treated to the same story, this time playing through the optimistic eyes of the android 9S instead of the stoic front presented by 2B. Similar to other titles’ New Game+ systems, all character and weapon progression carries over. In NieR: Automata, even side quest completion persists across playthroughs. It was all enough to elevate my interest. Across my second playthrough, the existentialist themes in the plot started to resonate with me. As 2B and 9S start to question the point of all this conflict, I too started to consider the point of the repetition. The references to the names of existentialist philosophers were not lost on me. And, as I re-encountered side quests that had been too daunting in the first run, and then completed them with the much more powerful androids of the second run, my eyes started to open to the intentions of the game designers. In a way, the combat became easy enough that it is was simply a part of traversal. The trivialising of the combat echoed the characters’ questioning the meaning of it all. Moving from one side quest to the next became my real objective. 9S had abilities that differed from 2B’s just enough to keep combat interesting. I started to understand the Chip System better, learning how to combine them into more powerful versions, and I started farming materials to upgrade weapons. I had put nearly 20 hours into NieR: Automata and I was still learning new things.

And then it ended again. 2B again cries out, in existential anguish, “It always ends like this!”

I have read of many players calling it quits at this point. I argue that this is when the game starts. I completely understand a player not wanting to wait 20-25 hours for the game to ‘start.’ Platinum seems to agree with me, and had prepared for players being ready to leave, as the second ending includes a ‘Coming Soon’ trailer of the next run through. The third playthrough is where Platinum put NieR: Automata’s opening credits as well. Depending on how thorough a player wants to be, they could spend another 20-25 hours unlocking endings C, D, and E. My thoughts and, dare I say, feelings, about ending E are a subject for another essay.

NieR: Automata is a game that will have a long tail. People will be discovering it for years to come. Those who see it through to its true ending will sing its praises, and many others will tire of it long before it’s over. And neither group will be wrong.

Are you in either group yet? Let me have it in the comments. Full spoilers for Route E in the comments!!! I need to discuss it with someone. As always, share this with your friends. New post next week!