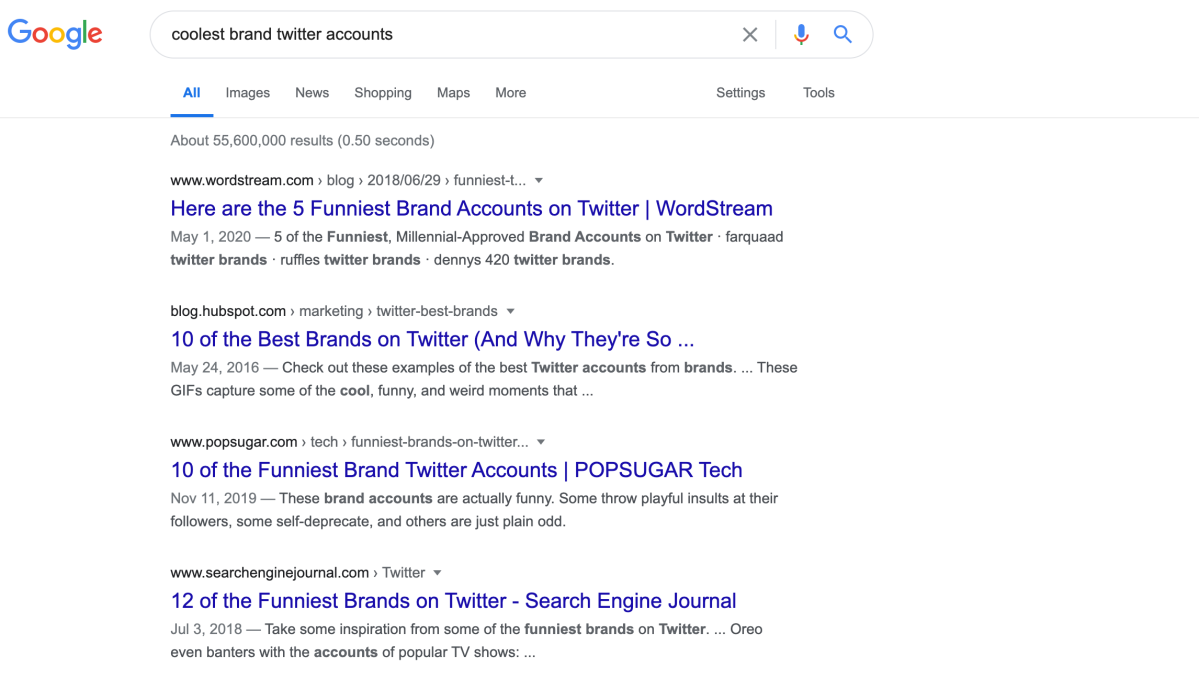 Nihilist Arby’s is a Twitter account with nearly 400K followers and, according to itself, absolutely nothing to say. It does, however, provide an interesting lens with which to examine the evolution of advertising and brand identities on Twitter, particularly in light of Lessig’s work on modern sharing economies. In his 2008 work, Remix, Lawrence Lessig puts forth that all economic exchanges are based in either 1) a commercial economy, in that they revolve around something of tangible value, such as money; or they are 2) a sharing economy, in that they are based on something intangible, such as friendship, or a favour. When corporate brands utilize crafted identities on social media sites such as Twitter in order to engage directly with consumers, they are attempting to shift their marketing from a commercial economy—in which advertising mindshare is attained through the purchase of time or space in which to advertise—to a sharing economy—one in which friends, or in this case, followers, will spread the message without being compensated. If you say cool things, your cool friends will repeat those things, right?

Nihilist Arby’s is parodic satire. Regardless of the account’s surface level claims to the contrary, it has something to say. However, Arby’s is not the target of the parody. Nihilist Arby’s satiric barbs are aimed at Brand Twitter as an entity. Account creator Brendan Kelly, while working in advertising himself, “imagined a scenario where someone in charge of a brand’s Twitter account…would be ‘exposed to…how meaningless everything is.’” Nihilist Arby’s is how Kelly envisioned such an epiphany might play out. According to Kelly, the use of the Arby’s name “had less to do with anything specific about Arby’s and more with how goofy it sounded.” Although the Nihilist Arby’s account is still active, tweeting at least twice a month over recent months, it has plateaued in terms of growth. The official Arby’s Twitter account currently has more than twice as many followers as the Nihilist Arby’s account. However, Nihilist Arby’s engagement numbers— its likes, retweets, replies, etc.—dwarf those of the brand’s official account by a wide margin. This engagement comes on the backs of absurdly dark laments about the meaninglessness of life coupled with the obligatory exhortations to “enjoy Arby’s.”

Brands have existed on Twitter since the platform’s inception in 2006. In fact, as Nathan Allebach said over on Vulture, “Twitter has facilitated a new sort of intimacy for brands, one in which they can blend in with people and develop their own personas.” Brands on Twitter, like almost any entity on Twitter, are seeking to parlay this intimacy for engagement, as a means to attain the markers of a successful digital meme as they are defined by Shifman in 2019’s Memes in Digital Culture: namely fecundity or “swift diffusion,” longevity, and, to a lesser extent, copy-fidelity. In many cases, brands are actively seeking to have their followers manipulate the message and, in some way, make it their own, so that copy-fidelity is less important than fecundity. For example, here, the official Arby’s Twitter account is straightforwardly (rather too straightforwardly, really) asking for interaction:

Note the engagement numbers taken from a Nihilist Arby’s tweet from the same week, thus having a similar amount of time to attract engagement:

The less active Nihilist Arby’s, with fewer followers, has almost ten times as many likes and twice as many responses. These equate to engagement, to the “swift diffusion” Shifman refers to as a marker of successful meme spread.

Arby’s response to Nihilist Arby’s highlights how well they, as a company and a marketing entity, understand advertising’s new sharing-economy landscape. As Arby’s CEO Paul Brown put it, “You don’t want to be a friend with that kind of a person who’s defensive and you can’t joke around.” In his statement, the executive is explicit about what kind of “friend” he wants Arby’s to be. Ultimately, rather than using legal action against the Nihilist Arby’s account, the marketing team decided to embrace the parody. They created a marketing event by sending the account-creator a bag of Arby’s sandwiches and a borrowed puppy to pet for a while, with a note that read: “Cheer up, buddy. You live in a world with puppies… and sandwiches.”

In this manner, the relationship and interaction between Arby’s the brand and Nihilist Arby’s the parody highlights one of the biggest differences between marketing in commercial economies and in sharing economies as they are defined by Lessig. As brands continue to, through their advertising, define themselves as individual accounts with personalities and relationships, they give up some of the control over their own image that they may have formerly enjoyed. If they want to walk with the cool kids in the halls of the high school that is Twitter, then they are going to have to learn to laugh at the jokes.

Sherwin-Williams missed that day at marketing school. A few weeks ago, Buzzfeed ran a story about Tony Piloseno, a Sherwin-Williams employee, and apparent paint-enthusiast, who operates a Tik-Tok account, @tonesterpaints, with a staggering 1.5M followers.

When Sherwin-Williams found out about the successful account, they fired the kid.

Tony had been working at a Sherwin-Williams store for three years. He probably started making these Tik-Toks because of the exact existential dread that Nihilist Arby’s is attempting to illustrate. According to the Buzzfeed article linked above (give ’em a click already), the sixth video Piloseno made reached 1M views.

But when Piloseno reached out to Sherwin-Williams marketing, offering to share his following with the company, they didn’t send him sandwiches, puppies, or even paint-rainbows. They accused him of stealing company materials and time and sent him packing. He didn’t do those things. Again, according to Buzzfeed’s reporting, Piloseno purchased any paint that wasn’t already part of a customer’s order. But all of that is beside the point. The point is:

This is not how to best use social media to promote your brand!!!

My guess is that the dust has not yet settled in the marketing department over at Sherwin-Williams. But at the very least, things are looking pretty good for Tony Piloseno.